The Society of the Sisters of Jesus is an institute of consecrated life, a religious society of diocesan right. 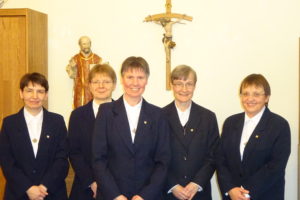 It is the highest authority in the Society and represents the whole Society. It is a symbol of its unity in love.

An ordinary General Chapter is convened every six years. It is responsible for protecting the spiritual heritage of the Society and for promoting appropriate renewal. The General Chapter elects the Superior and her Council.

At the 2021 General Chapter, Sister Alena Jindrová was elected as Superior for the following six years.

The Society is led by the General Superior, who resides in the Centre of the Society, in Olomouc (the Czech Republic). The General Council helps her in her task.

The communities abroad (Rome, Vienna, Klagenfurt), the community in Olomouc fall under the direct responsibility of the General Superior.

The Provincial Superior is subordinate to the General Superior.

The Czech Province is made up of five communities (in Prague, in Ústí nad Orlicí, in Český Těšín, in Kožušany near Olomouc and in Olešná near Nové Město na Moravě).

The Provincial Superior, with the support of her Council, heads the province.

On 22st October 2022, sister Olga Zelená was entrusted with this task for the next three years. 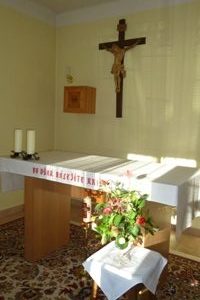 The communities are the basic cells of the Society. Small groups of three to five sisters, led by the local Superior, also strive to form a community of faith in which God is sought and loved above all.

The Sisters live together in community, enjoying a simple life style. The centre of every community is a chapel with the Eucharistic Christ. The name of each chapel indicates the community’s specific mission.